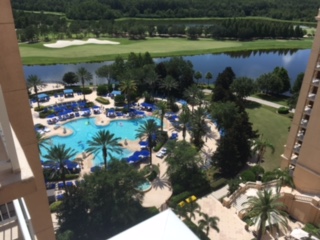 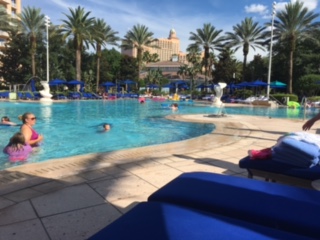 Last weekend, my husband and I were treated to a long weekend at the Ritz Carlton courtesy of Park West Galleries, because we bought art from them a couple months ago.  The Ritz in Orlando is a lovely hotel, with many wonderful amenities, fantastic service, and excellent dining.  The room itself was excellent, with a big bath and a Nespresso machine.  The amenities included a spa, which I didn’t check out because we were busy with the Park West art auctions each day until after noon.  The Ritz had a huge pool, complete with water bottles or chilled water with fruit.  There was an open air casual restaurant where you could get nachos, burgers and the like, and a bar conveniently located near the pool.  Guests at the Ritz were allowed to use the facilities at the JW Marriot next door which included a lazy river pool.  The dining options were also pretty decent as they had two restaurants and the pool café, plus the restaurants at the JW Marritot next door.   Even the buffets that the Ritz supplied for the Park West VIPs were very good, and I normally hate buffets.

We had a wonderful time at the art auctions and the previews of the next day’s art at night.  Park West even had a casino night.  They brought out gaming tables and we were given chips.  Whoever had the most chips at the end of the night won $750 towards art, and the person in 2nd place won $500.  Jim and I were convinced we had not won and almost gave our chips to another couple, but we got the second place prize of $500.  As we played blackjack and craps, surrounded by wonderful art, a DJ played Frank Sinatra and lots of jazz.  Park West had arranged for an open bar and the Ritz bartenders were very attentive.  All in all, a fabulous evening.

Here’s the rub, there were kids, lots of kids.  The Ritz even has a Ritz kids club.  I didn’t make it to the lazy river because I was told by others that it was mobbed with all ages of kids, some in diapers.  I was a little surprised.  Jim had looked online and found out the rooms normally go for $300.  (Our room was included in our VIP package from Park West Galleries.)  We bought nachos and iced teas at the pool one afternoon and that was a $30 bill as lunch was not included in our VIP package.  I don’t know how people afford to bring kids to the Ritz and feed them, but there were many there.

In the end, I’d have to say that it was a lovely weekend.  The Ritz is a great hotel with great service and nice dining options, but simply too many kids.   For those of us who don’t want to travel with other people’s kids,  I can’t recommend the Ritz.

This site uses Akismet to reduce spam. Learn how your comment data is processed.

I started this blog before I became a travel agent. I love to help others explore the world. I understand that everyone has unique wants and needs when they travel. Please let me help you find the right travel for you. What are you waiting for?