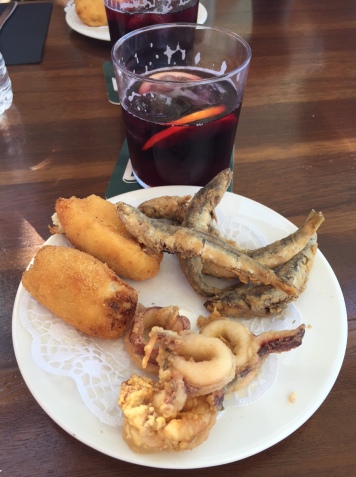 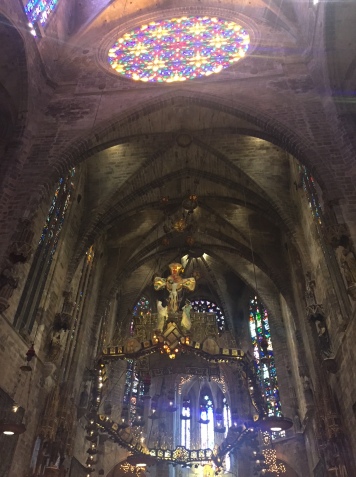 Ibiza and Mallorca are both Spanish owned islands that embrace the essence of Mediterranean culture.  The port in Ibiza is dominated by a 16th century fortress, Almundaina,  which is on a high hilltop overlooking the water.  Of course Ibiza is also famous for its beaches and its nightlife.  Since Jim and I are geeks, we were fascinated by the fortress.  We walked up the hill to the fortress around the outer walls to the chapel at the very top.  The chapel is a good representation of Renaissance architecture and style with paintings and works of art dating to the 1500s and 1600s.  We then walked back down the hill through the original village inside the fortress walls.  Small shops and apartments, including a couple tiny bars just big enough for a bar with a few seats lined the winding cobblestone streets.  The few cars that drove through the village beeped so anyone walking could jump into doorways and let the cars pass.  As Americans, we were fascinated by the narrow cobblestone streets and giggled every time we had to jump into a doorway to allow a car to pass.

Once we had walked back down through the village, we had a lovely lunch and white sangria with a stem of rosemary at a local café.  The white sangria was refreshing and flavorful.  I decided that we just had to see the beach, even though beaches are not Jim’s favorite.  We found some local people who were really friendly and were headed near one of the closest beaches, so we shared a cab and went to the beach nearest the port.  Considering I live in Florida and frequent beaches there, I was curious about the famous beaches in Ibiza.  The view was certainly different, with rocky hilltops lined with colorful buildings.  Sangria was the drink of the day, and Jim and I each had a couple of red sangrias on the beach as we enjoyed the view.  Other than the fortress and the beaches, Ibiza is famous for it’s nightlife.  It’s a haven for famous DJs and parties, and the parties go all night long.  While we were there, Paris Hilton was going to DJ at a club at 3:00 a.m..

We went on to the island of Mallorca and we loved that island even more.  We went on a tapas tasting tour and tasted the food and sangria at three places.  We ate seafood tapas at a restaurant where the fishing boats were docked.  Men were busy nearby mending their nets.  Tiny fish were breaded and fried whole like fish fries, which I liked, but Jim wasn’t so sure about.  Then there were fish croquettes and octopus.  Jim liked the octopus better than the fish.  Next, we went to a place where we were served a potato and egg frittata and bread and sausage along with swirled bread with powdered sugar on top again with red sangria.  I later learned that my Latin friends in Florida call those pastries Mallorcas.  At the last stop, we had two different kinds of breads, one with soft cheese and another with smoked salmon and more red sangria.  The seafood and pastries were all delicious, and the sangria was all fantastic.  You just can’t go wrong with sangria in Spain.  It’s all good.

After the tapas tasting, we toured Mallorca’s cathedral, which was built in 1300.  We were both fascinated by the flying buttress construction, and the stone work outside.  Inside, self guided tours were offered with a device and headphones.  Multiple languages were offered, which is helpful.  We took our time and enjoyed perusing the priceless artwork, gold goblets and crosses that are now on display, but had been used in masses there for endless years past.  The vastness and richness of the cathedral was amazing to us as Americans.  For anyone who loves history, the cathedral is well worth a visit.  We also stopped by a castle high on a hilltop overlooking the town, and were also fascinated by the arches and stonework there as well.

Ibiza and Mallorca are two islands well worth visiting.  Should you be near Barcelona, there are high speed ferries that go between Barcelona and the islands under the Balleric Company, so they are not hard to access.  We would love to go back and visit Mallorca again.  When you visit, be sure to drink as much delicious sangria as possible.  To do anything less should be illegal!

One thought on “Spain Episode 1: Ibiza and Mallorca”

This site uses Akismet to reduce spam. Learn how your comment data is processed.

I started this blog before I became a travel agent. I love to help others explore the world. I understand that everyone has unique wants and needs when they travel. Please let me help you find the right travel for you. What are you waiting for?